Have you ever had times that you had nothing to do?  Most of us have times like this.  Do you realize that we have an interesting world?  It has many things happening every day and some of these things are very interesting.ss

If you have joined Facebook or other social media, you would have seen a lot of interesting pictures and videos.  I didn’t know our world is so pretty until I saw so many nice pictures of scenery from around the world.

You can also find artworks and drawings.  I love the 3D picture most, it looks as if there is a big hole in the ground when you see the picture, but it is just an illusion.  Some people are so talented and their artworks are so amazing.

It would be insane if you say you don’t have anything to do.  There are so many things that you can enjoy doing.  From the most common activities like sport, reading, music, photography, art and craft.  Then come the not so common one like invention, bonsai, meditation, gold hunting and weather prediction.

There are also a lot of bizarre hobbies which are fascinating.

For the past few weeks, I was watching Youtube videos.  Mostly about conspiracy theories.  I was drawn into it for I found these videos extremely interesting.  Disregard the fact that they are true or untrue.

The first video I want to show you is September 11.  Why did the Twin Towers collapse?  The official story was the Twin Towers were brought down by the aeroplanes in a terrorist attack.  You saw it happened, but could the jet fuel be hot enough to bring them down?

At the time of the attack, I was watching TV and saw the second plane hit the second tower.  I did not believe it when I saw the tower collapse and turned into ashes.  What happened to the structure underneath where the plane hit?  They should be intact and the buildings should not collapse.  Even if they did, but it should not collapse the way it did.  This video answered my question.

It is not a conspiracy, what they are saying in the video is true.  The Twin Towers were brought down by bombs like they do when they demolish old buildings.  Who did this and why?  I will let you find out yourself.

Do you want to find out where is this plane now?  Most people think it went down in the Indian Ocean.  Many countries have spend so much effort, but still they cannot find it.

They said the plane has crashed into the Indian Ocean, it makes no sense at all. The plane would break up into thousands of pieces. Some of the luggages and seats would float and be discovered by the search parties.

I will show you one more Youtube video which is the most interesting of all.

Does Illuminati really exist?  What are they going to do to our world and our countries?  It is indeed a really interesting subject.

This video talked about the distribution of wealth in America.  That is capitalism to the extreme, it is so sad.  I felt sorry for the poor people.

The defence budget of America is estimated to be 892 billion dollars.  With a population of 311 millions, that means each person contributes $2800 dollars per year.  That is a lot of money for defence.  Many of the poor people couldn’t even make this much money in a year.

This is how the money is used. 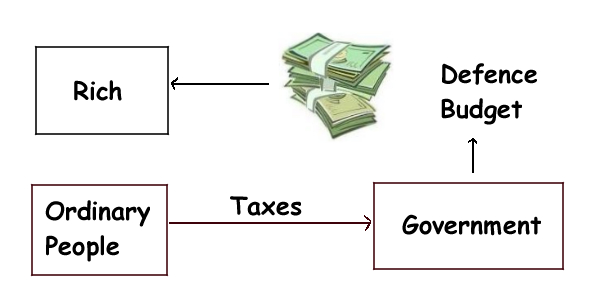 This is “rob the poor and give it to the rich”.  No doubt about it.

Who are they defending themselves from?  The communists?

There is more to it than that.  Do you know who is in control of the government?

There is one last video I want to show you.  You will get the whole picture after you watched it.   Before I watched this video, I thought selling weapons to make money was their goal.  It is only part of the plot.

There is a US Debt Clock online you can see jut for fun – www.usdebtclock.org

There are so many interesting things that you can do.  Open you eyes and your mind and you’ll find something you like.